Goverment yojana
Aatm Nirbhar Bharat Abhiyan package Declared By PM Narendr modi ji
Aatm Nirbhar Bharat Package 20 Lakh Crore Declared by Prime Minister Narendra Modi will address the nation at 8 pm today, a day after his six-hour meeting with Chief Ministers on the road ahead after May 17, when the nationwide coronavirus lockdown is due to end. This will be his third such address since he announced the lockdown in late March to slow the spread of the highly infectious COVID-19.
PM Modi had hinted in yesterday's meeting that the lockdown - extended twice -- would continue, but with far less restrictions. 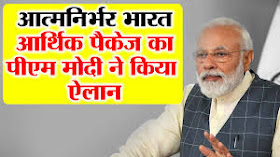 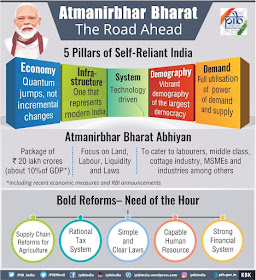 PM Modi said that the financial package will help revive every branch of the economy - from demand, supply chain to manufacturing.

With five days left for the third phase of the nationwide coronavirus lockdown to end, Prime Minister (PM) Narendra Modi addressed the nation on Tuesday, May 12. Addressing the nation on the coronavirus situation, Prime Minister Narendra Modi announced an economic package of Rs 20 lac crore. He said that it is 10% of India's GDP. The PM added that it was for the MSMEs and the ‘honest taxpayers’.
Aatm nirbhar Bharat Abhiyan Modiji Speech 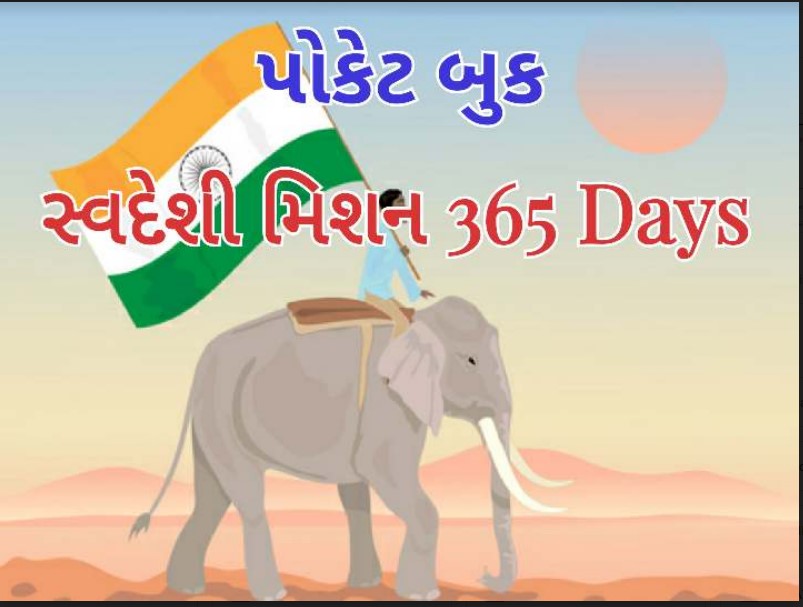 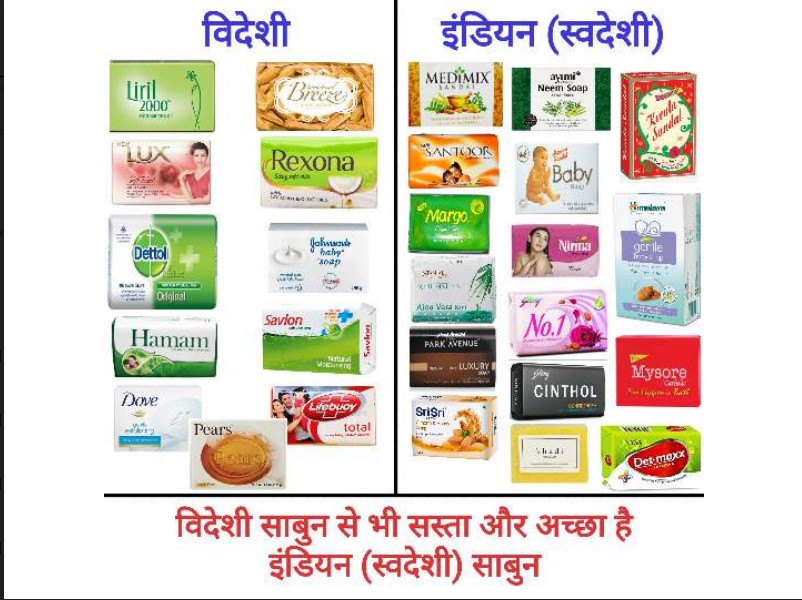 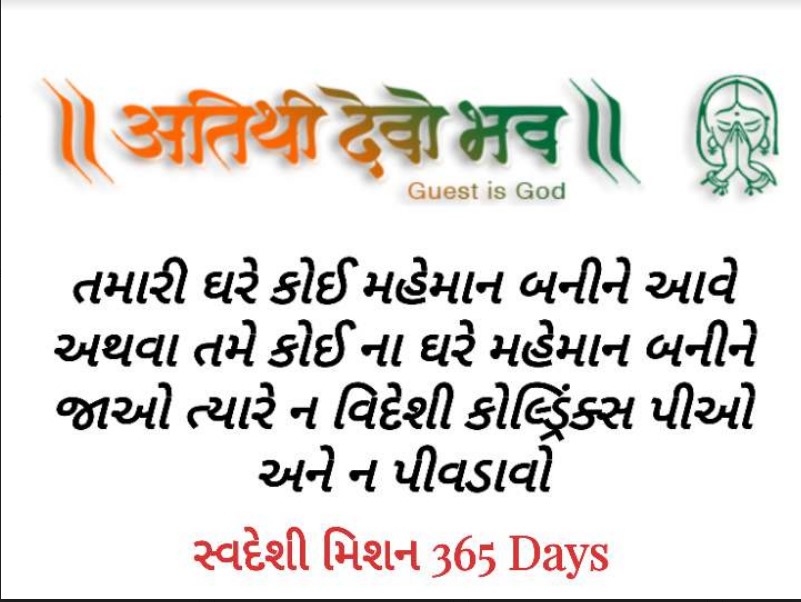 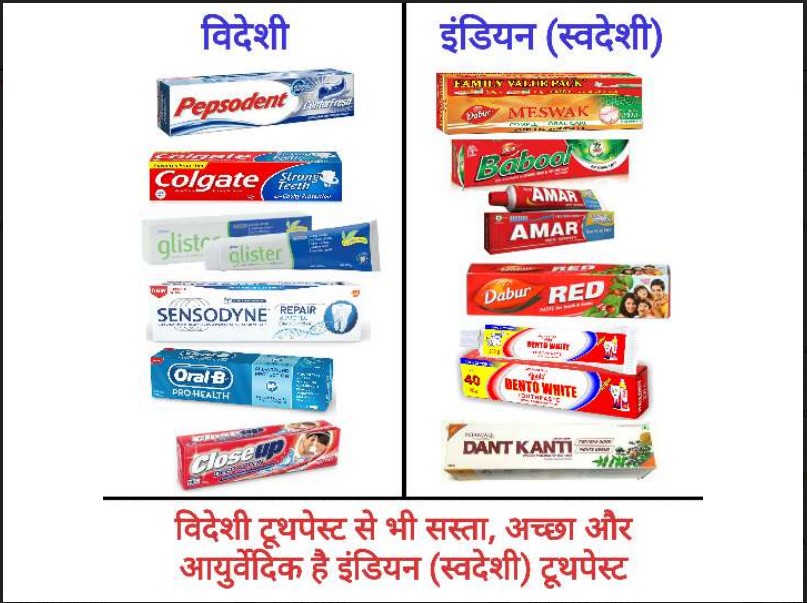 * 42 lakh people have been infected worldwide.
* 2.75 lakh people have died tragically. Even in India, many people have lost their loved ones. I express my condolences to each and every one of them.
* The whole world is now engaged in a battle to save lives. We have never seen such a crisis. This is an unimaginable crisis.
* But it is not permissible for a human being to get tired, lose, break, disintegrate.
* By being vigilant we also have to survive and move forward. Our determination is many times bigger and stronger than this crisis.
* The 21st century belongs to India. A new look at the world before and after Corona reinforces the belief that the 21st century will belong to India.
* There is only one way to make that dream come true: self-reliance
As a nation, we are at a critical juncture.
* This calamity has also brought a signal, a message, an opportunity for India.
* Not a single PPE kit was made in India when the Corona crisis started. There was also negligible production of N-95 masks.
* Today, 2 lakh PPE kits and 2 lakh N-05 masks are being made in India every day. This is because we have the ability to turn disaster into opportunity in India.
* Self-reliance does not mean having a self-centered economy. India's self-reliance is of the Vasudhaiva Kutumbakam type. Which considers the whole world as a family. 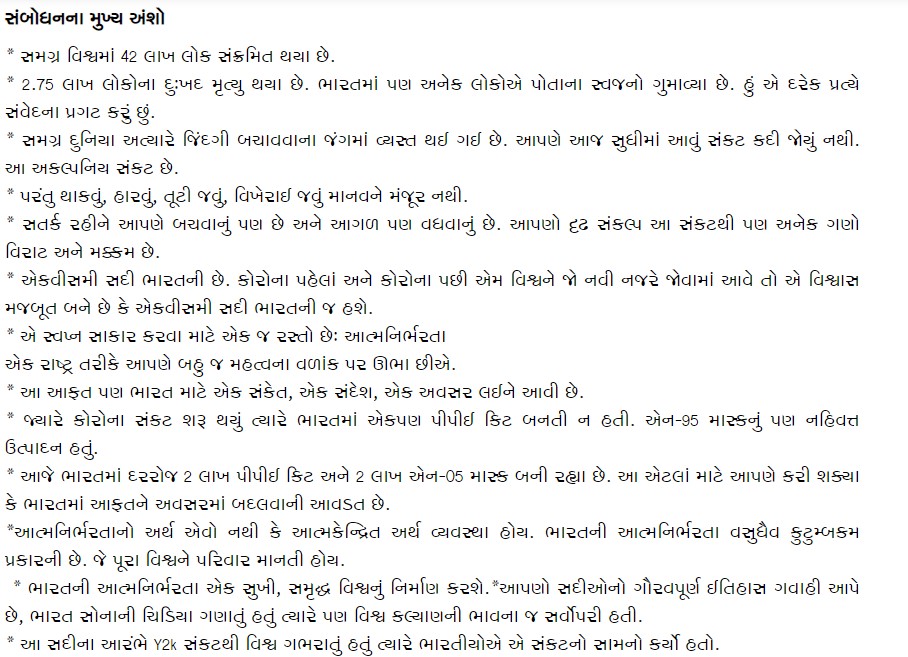 * India's self-reliance will build a happy, prosperous world. * Our glorious history of centuries testifies that even when India was considered a golden sparrow, the spirit of world welfare was paramount.
* At the beginning of this century, when the world was terrified by the Y2k crisis, the Indians faced that crisis.
* We will make the best products, improve the quality, modernize the supply chain. What we can do and we will do.
* I have seen an earthquake in Kutch. Everything was shattered all around. I have seen the debris with my own eyes. At that time no one could have imagined that Kutch would ever sit still. But it became possible. Today Kutch is prosperous.
* If we decide that then it becomes possible.
* The magnificent building of self-reliant India stands on five pillars.
1. Economy: A system that gives a quantum jump.
2. Infrastructural facility, which becomes the identity of modern India.
3. The system, which is the technology driven by the dreams of the 21st century.
4. Indian democracy, which is the largest in the world. 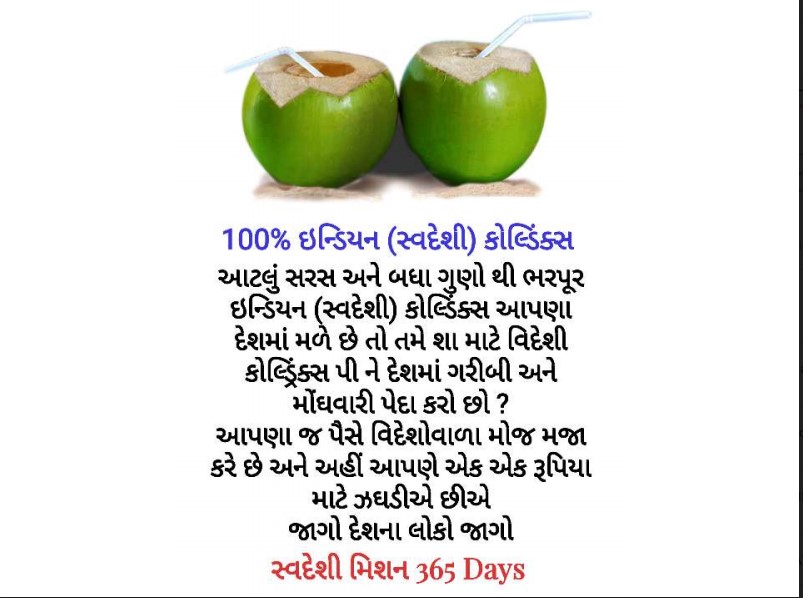 5. Demand, announcement of special economic package to coordinate with supply, which will work on the needs of a self-sufficient India.
* Announcement of special economic package, which will work on the needs of a self-reliant India.
* I am announcing an economic package of Rs 20 lakh crore today under the Atmanirbhar Bharat Abhiyan.
* This amount is about 10 percent of India's GDP
* A package of Rs 20 lakh crore in 2020 will give impetus to the self-reliant India campaign.
* Will work for Land, Labor, Liquidity and Law each
* This package will provide assistance for cottage industry, housing industry, small and medium industry.
* This is a package for the workers and farmers of the country who work day and night for the countrymen.
* From tomorrow for a few days, the Finance Minister will give special information about the package related to the self-reliant India campaign.
* Corona Crisis has realized the importance of local market, local supply chain, local products. The locals are saving us. Local should be our life mantra.
* What is global today was local at every single stage. But it has become global by winning the trust of the people.
* Let us be the vocalists for the local system of India.
* Corona removal is not possible as soon as possible, but it does not mean that we get tired. We will wear masks, we will follow the distance but we will not keep distance from the target.
* The fourth phase of the lockdown will be a new look, with new rules

Lockdown as per instructions received from the States.4 Information regarding May will be available before 18th May.
* I believe we will fight Corona and move on.
* Self-reliance will give us happiness and also make us strong.
* Self-reliant India is the new resolve of the new India.
Aatm Nirbhar Bharat Abhiyan package Declared By PM Narendr modi ji 2020-06-03T06:08:00-07:00 Rating: 4.5 Diposkan Oleh: MISSION EXAM