Home / Corona Updates / How to check and remove apps made by China from your mobile, Remove China App Campaign

How to check and remove apps made by China from your mobile, Remove China App Campaign

Corona Updates
We Indians can give China the right answers by boycotting products and services made by China. We have little experience with the number of apps we use that have China Mad on our mobile phones. Removing them will have a definite economic impact on Chinese companies whose pictures show below is a list of some of the apps we use in our mobiles, little do we realize that they are made in China.
The custom of adopting indigenous thing has started all over the country. It also includes mobile apps. Opposition to coronavirus donor Chinese apps is also being seen on social media. Indigenous app ‘Remove China Apps’ has become popular for finding and cleaning Chinese apps from mobile phones. This app shows which of the installed apps in the user's mobile is Chinese and also deletes it 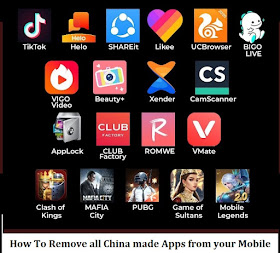 Launched on May 17, 2020, the Remove China App has been downloaded more than 1 lakh times so far. A company called One Touch App Labs based in Jaipur, Rajasthan has created these Remove China apps. Over the last few days, you too have been receiving the following message, which is an app attached to this Chinese app.
‘Remove China Apps’
‘Remove China Apps’ is currently available for Android devices. The developer of the app claims that this app shows the country in which the app is installed on the Android phone. Mostly though it shows Chinese apps and uninstalls them

"China's biggest fear today is its own people, with a population of 100 million, who are treated like bonded laborers with none human rights and who enrich the govt with their labor. After the coronavirus, factories have closed, exports have been hit, unemployment is rising. People are angry. If 100 million people in our country boycott Made in China goods and start a movement, it will have a global impact. It will also help our own industry, our own workers. "He said. He uploaded a 7-minute YouTube video that you can watch at the end of the article 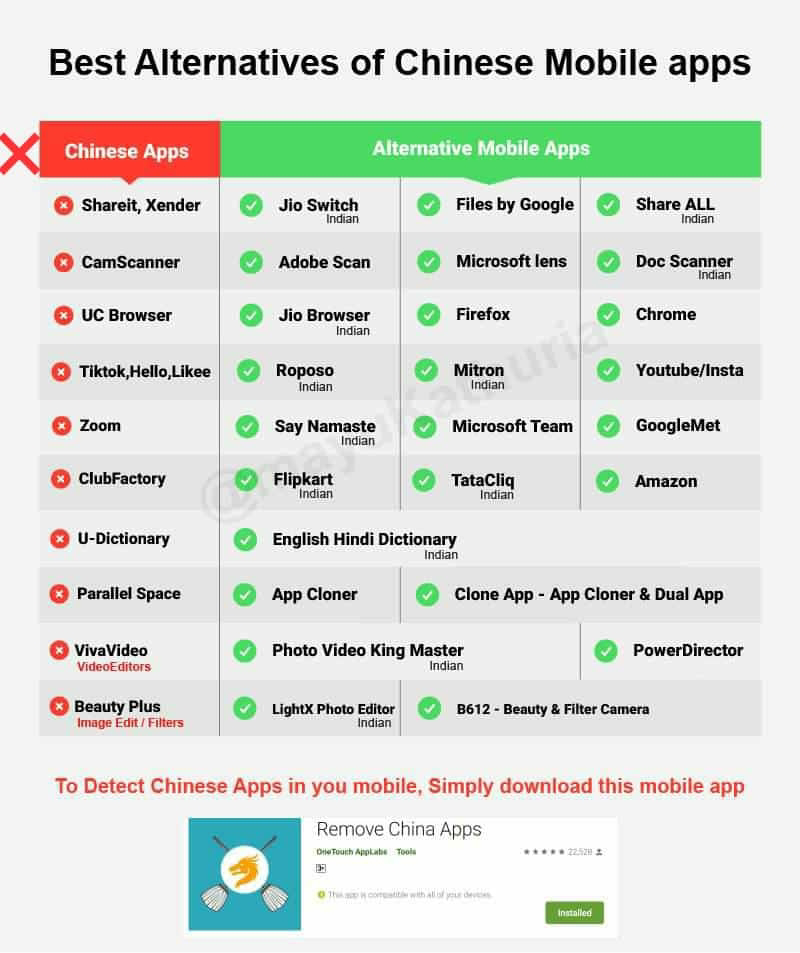 India has a large population that has access to smartphones and internet. There is a huge potential customer base that has attracted many Chinese app developers. These Chinese apps have captured the Indian market in every segment from utility apps to social media and most importantly, video games.
Here Are List Of Some Chinese Apps.
1 TikTok
2 Kwai
3 PUBG
4 Helo
5 Like
6 Shareit
7 Sharechat
8 Xender
9 Vigo
10 Bigo
11 UDictionary
12 DU Battery Saver
13 TurboVPN
14 NewsDog
15 Cam Scanner
16 Club Factory
17 Mi Store
18 Oppo Store
19 Vivo Store
20 ES File Explorer
21 Cheetah Mobile
22 Clean Master
23 Zoom
24 Shein
25 Wish
26 AliExpress
27 Clash of Kings
28 Mafia City
29 Mobile Legends
30 Castle Clash
The ‘Remove China Apps’ app was launched on May 17 on the Google Play Store. The app has received over 1 million downloads so far. It has a 4.8 rating on the Play Store.
This app is available for free. No login required for app access. However this app provides information on Chinese apps installed from the Play Store.

An app that will get rid of the Chinese app 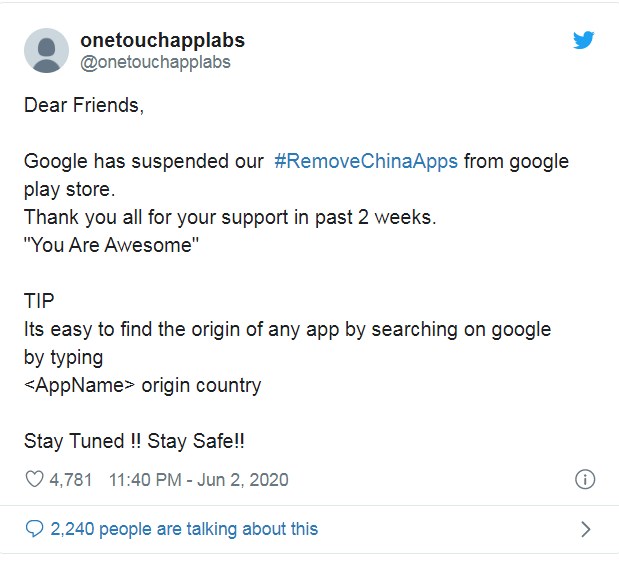 For the last few years, there has been opposition to Chinese products in India, but there has been a worldwide outcry against China for the spread of Corona. Not only Chinese products, but now Indians are being mocked by Jinping's government, which is misleading Pakistan-Nepal, including Ladakh. Even in this, PM Modi gave the slogan of self-reliant India and now the countrymen are boycotting China's application with Chinese products and every Chinese goods-service. 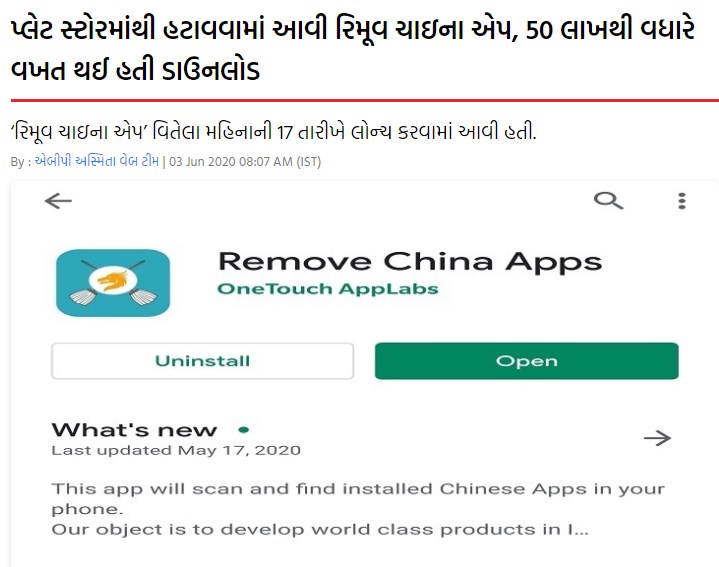 Under the Boycott China campaign, an application has now come on the market that will uninstall all Chinese applications from your mobile. 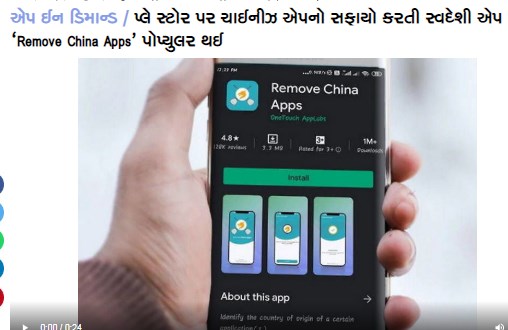 The app is created by the Jaipur-based OneTouch Apples website. The company offers Android and iOS app development and hybrid app development services.
Why did the ‘Remove China Apps’ app become popular?
The country is currently undergoing an anti-China atmosphere. There is a campaign going on on social media to avoid using Chinese products. Anti-China sentiment is on the rise due to Tiktok VS YouTube War, Indo-China border dispute and Corona. Due to these controversies, this app that cleans the Chinese app has become popular.
Along with this, the short video making app Mitron has also become famous as Tiktok is a Chinese app. It has received over 5 million
Yes, there is an application in India that will now uninstall a Chinese app from a phone or any other device.
How to check and remove apps made by China from your mobile, Remove China App Campaign 2020-06-03T03:49:00-07:00 Rating: 4.5 Diposkan Oleh: MISSION EXAM